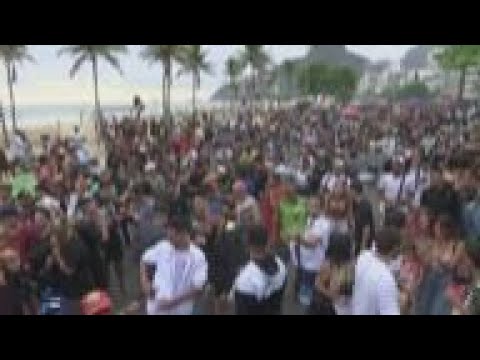 Legalization
Share on Facebook
Share on Twitter
Share on Pinterest
Share on LinkedIn
(8 May 2022)
RESTRICTION SUMMARY
ASSOCIATED PRESS
Rio de Janeiro – 7 May 2022
1. Crowd of demonstrators next to Ipanema Beach
2. Local youth smoking marijuana
3. Various of demonstrators marching in support of legalizing marijuana
4. Various of demonstrators playing drums
5. Marcher holding sign reading in Portuguese: “For the freedom of plants.”
6. Marchers holding banner reading (Portuguese): “Marcher of favelas for legalization and end of violence against the poor.”
7. Marcher holding banner reading (Portuguese):”Stop the war against the poor”
8. SOUNDBITE (Portuguese) Matias Max, 40-years-old, demonstrator:
“The prohibition of marijuana affects everyone. There are clear examples of this, like many here in Rio de Janeiro who come from communities who could become victims of shoot-outs.”
9. Marchers pushing children in strollers
10. Marchers holding banner reading (Portuguese): “Pot for chronic diseases”
11. Longtime activist and politician Carlos Mink supporter of marijuana legalization
12. SOUNDBITE: (Portuguese) Carlos Mink, 70-year-old demonstrator wanting marijuana legalized:
“You can get the plant for medical use, but you can’t produce it here.  You have to get it imported and it’s very expensive, that’s why we should not stigmatize a plant that could help so many people.”
13. Marchers smoking marijuana
14. Marchers in street
STORYLINE:
Hundreds of demonstrators marched in Rio de Janeiro on Saturday calling on the government to legalize marijuana and allow for it to be purchased in stores and consumed without fear of arrest.
Marchers walked along the picturesque beach of Ipanema, an upscale seaside neighbourhood in the city, waving banners with marijuana motifs and slogans supporting legalization, under the watchful eyes of local police and the bemused gazes of locals and tourists, some of whom showed their support by cheering and clapping.
A pungent smell of burning marijuana wafted over the march, with participants dancing to the beat of drums during the rally, made up mostly of younger people.
With upcoming elections that could bring in a leftist government led by former President Luiz Inacio da Silva, many hope federal drug laws could shift in their favor, after four years of the conservative government led by President Jair Bolsonaro, who has railed against drugs as a source of violence in gang dominated favelas.
Some want police to stop drugs raids in poor favelas, which they say end with violent confrontations with local drug gangs, leading to deaths of innocent bystanders and increasing the threat of violence against the poor.
But many just support legal use of marijuana for enjoyment, which they displayed while marching and having a smoke.
===========================================================
Clients are reminded:
(i) to check the terms of their licence agreements for use of content outside news programming and that further advice and assistance can be obtained from the AP Archive on: Tel +44 (0) 20 7482 7482 Email: info@aparchive.com
(ii) they should check with the applicable collecting society in their Territory regarding the clearance of any sound recording or performance included within the AP Television News service
(iii) they have editorial responsibility for the use of all and any content included within the AP Television News service and for libel, privacy, compliance and third party rights applicable to their Territory.